Chardham Package is one of the best char Dham yatra booking portals where you can book your tour packages from any location in India as well as NRIs also send us booking requests. We manage the entire journey from starting point to end. It is a spiritual visit to four abodes (4 Temples) in Uttarakhand state in India. Doing 4 Dham yatra is play a vital role in the life of Hinduism. There are many ready-made Chardham yatra packages that are available now. You can send us a request for booking as well as can discuss customized char Dham yatra packages 2023. 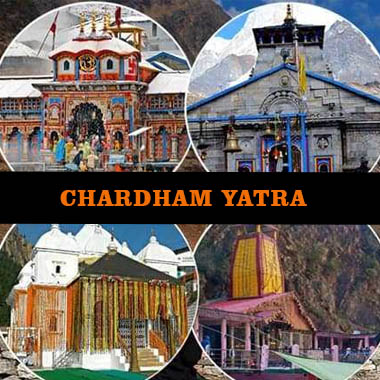 Uttarakhand state of India has four Hindu spiritual sites which is also named as Chardham. These are Yamunotri, Gangotri, Badrinath and Kedarnath. Nestled in the lap of magnificent Himalayas, these four sites are the epicenter of spiritual action in north India. Habitually, the Chardham Yatra Package is undertaken from the west to the east. Thus, the yatra package starts from Yamunotri, then scheduled to Gangotri and finally to Kedarnath and Badrinath.

Amongst the four Char Dham, Yamunotri and Gangotri are devoted to goddesses Yamuna and Ganga in that order. On the other hand, Kedarnath is devoted to Lord Shiva while Badrinath is dedicated to Lord Vishnu. furthermore, people also visit Hemkund Sahib in the locality, which is one of the top situated spiritual sites in the country. Thus, pilgrims visit all these places in ambition of washing away their sins and to attain salvation, by the blessings of the Lord.

Yamunotri : The westernmost holy place of Yamunotri is one of the most visited temple in Char Dham Package which is located near the source of the river Yamuna. The Yamunotri temple, build by King of Tehri Garhwal, Maharaja Pratap Shah, is positioned on the left bank of the river Yamuna. The river is well thought-out as a heavenly mother and a goddess for all the Hindus and has been an well-known part in the expansion of the society in the north India.

Gangotri : Gangotri Dham is positioned on the banks of river Bhagirathi at an altitude of roughly 3200 m on top of sea level and appreciated as one of the most blessed and holy shrines for the Hindus. Gangotri has an important place in the Char Dham Package. The Gaumukh Glacier, known as the source of the river Ganges is positioned on a trek route from Gangotri. The tourists who wish to visit Gaumukh Glacier need Government authorization.

Kedarnath : Kedarnath temple well thought-out as the holiest pilgrimage among the most worshipped pilgrimages for the Hinduism followers. There are twelve Jyotirlingas of the Lord Shiva and Kedarnath is one of those twelve Jyotirlingas, positioned close to the foundation of the river Mandakini at an height of 3585 m on top of sea level. To visit this temple there is a trek way of 14 km from Gaurikund. though, the temple can also be visited by a helicopter travel which starts from Phata. This temple is positioned at the uppermost place of the Char Dham Package and has a very low oxygen level.

Badrinath : The most well-known and the mainly visited dham among the Chardham is Badrinath which is also known as Badri Vishal, the fourth dham. With the Neelkanth crest in the background, it is positioned between Nar and Narayan peaks. Badrinath is the mainly respected and the largest in the middle of the five Badris also called as the Panch Badri. Badrinath is one the Char Dham (four dhams) of India recognized by Adi Guru Shankracharya.

+91-9759222888
By submitting this form, Our chardhampackage.com team contact you for this enquiry.